[This post assumes knowledge of decision theory, as discussed in Eliezer Yudkowsky’s Timeless Decision Theory and in Arbital’s Introduction to Logical Decision Theory.]

I recently discovered an interesting thought experiment, “Betting on the Past” by Cambridge philosopher Arif Ahmed. It can be found in his book Evidence, Decision and Causality, which is an elaborate defense of Evidential Decision Theory (EDT). I believe that Betting on the Past may be used to money-pump non-EDT agents, refuting Causal Decision Theories (CDT), and potentially even ones that use logical conditioning, such as Timeless Decision Theory (TDT) or Updateless Decision Theory (UDT). At the very least, non-EDT decision theories are unlikely to win this bet. Moreover, no conspicuous perfect predicting powers, genetic influences, or manipulations of decision algorithms are required to make Betting on the Past work, and anyone can replicate the game at home. For these reasons, it might make a more compelling case in favor of EDT than the Coin Flip Creation, a problem I recently proposed in an attempt to defend EDT’s answers in medical Newcomb problems. In Ahmed’s thought experiment, Alice faces the following decision problem:

Ahmed goes on to specify that Alice could indicate which bet she’ll take by either raising or lowering her hand. One can find a detailed discussion of the thought experiment’s implications, as well as a formal analysis of CDT’s and EDT’s decisions in Ahmed’s book. In the following, I want to outline a few key points.

Would CDT win in this problem? Alice is betting on a past state of the world. She can’t causally influence the past, and she’s uncertain whether the proposition is true or not. In either case, Bet 1 strictly dominates Bet 2: no matter which state the past is in, Bet 1 always yields a higher utility. For these reasons, causal decision theories would take Bet 1. Nevertheless, as soon as Alice comes to a definite decision, she updates on whether the proposition is true or false. If she’s a causal agent, she then finds out that she has lost: the past state of the world was such as to cause her to take Bet 1, so the proposition is false. If she had taken Bet 2, she would have found out that the proposition was correct, and she would have won, albeit a smaller amount than if she had won with Bet 1.

Betting on the Past seems to qualify as a kind of Newcomb’s paradox; it seems to have an equivalent payoff matrix (Figure 1).

Figure 1: Betting on the past has a similar payoff matrix to Newcomb’s paradox

Furthermore, its causal structure seems to resemble those of e.g. the Smoking Lesion or Solomon’s problem, indicating it as a kind of medical Newcomb problem. In medical Newcomb problems, a “Nature” node determines both the present state of the world (whether the agent is sick/will win the bet) and the agent’s decision (see Figure 2). In this regard, they differ from Newcomb’s original problem, where said node refers to the agent’s decision algorithm.

Figure 2: Betting on the past (left) has a similar causal structure to medical Newcomb problems (right). 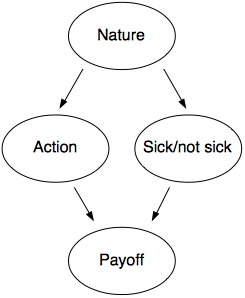 One could object to Betting on the Past being a medical Newcomb problem, since the outcomes conditional on our actions here are certain, while e.g. in the Smoking Lesion, observing our actions only shifts our probabilities in degrees. I believe this shouldn’t make a crucial difference. On the one hand, we can conceive of absolutely certain medical Newcomb cases like the Coin Flip Creation. On the other hand, Newcomb’s original problem is often formalized with absolute certainties as well. I’d be surprised if probabilistic vs. certain reasoning would make a difference to decision theories. First, we can always approximate certainties to an arbitrarily high degree. We might ask ourselves why a negligible further increase in certainty would at some point suddenly completely change the recommended action, then. Secondly, we’re never really certain in the real world anyway, so if the two cases would be different, this would render all thought experiments useless that use absolute certainties.

Before we examine the case for EDT further, let’s take a closer look at what LDTs would do in Betting on the Past. As far as I understand, LDTs would take correlations with other decision algorithms into account, but they would ignore “retrocausality” (i.e. smoke in the smoker’s lesion, chew gum in the chewing gum problem, etc.). If there is a purely physical cause, then this causal node isn’t altered in the logical counterfactuals that an LDT agent reasons over. Perhaps if the bet was about the state of the world yesterday, LDT would still take Bet 2. Clearly, LDT’s algorithm already existed yesterday, and it can influence this algorithm’s output; so if it chooses Bet 2, it can change yesterday’s world and make the proposition true. But at some point, this reasoning has to break down. If we choose a more distant point in the past as a reference for Alice’s bet – maybe as far back as the birth of our universe – she’ll eventually be unable to exert any possible influence via logical counterfactuals. At some point, the correlation becomes a purely physical one. All she can do at that point is what opponents of evidential reasoning would call “managing the news” (Lewis, 1981) – she can merely try to go for the action that gives her the best Bayesian update.

So, do Logical Decision Theories get it wrong? I’m not sure about that; they come in different versions, and some haven’t yet been properly formalized, so it’s hard for me to judge. I can very well imagine that e.g. Proof-Based Decision Theory would take Bet 2, since it could prove P to be either true or false, contingent on the action it would take. I would argue, though, that if a decision theory takes Bet 2 – and if I’m right about Betting on the Past being a medical Newcomb problem – then it appears it would also have to “one-box”, i.e. take the option recommended by EDT, in other medical Newcomb problems.

If all of this is true, it might imply that we don’t really need LDT’s logical conditioning and that EDT’s simple Bayesian conditioning on actions could suffice. The only remaining difference between LDT and EDT would then be EDT’s lack of updatelessness. What would an updateless version of EDT look like? Some progress on this front has already been made by Everitt, Leike, and Hutter 2015. Caspar Oesterheld and I hope to be able to say more about it soon ourselves.

I wrote this post while working for the Foundational Research Institute, which is now the Center on Long-Term Risk.

4 thoughts on ““Betting on the Past” by Arif Ahmed”

This is the blog of Caspar Oesterheld, Johannes Treutlein and Daniel Kokotajlo. Caspar is a computer science PhD student at Duke, supervised by Vince Conitzer; Johannes is a computer science grad student at U of Toronto, supervised by Roger Grosse; and Daniel is a philosophy PhD student at UNC Chapel Hill, supervised by Matt Kotzen and John Roberts, and a researcher at CLR. We mostly work on the decision theory of Newcomb-like scenarios and artificial intelligence. As effective altruists, we are also interested in a lot of other topics and occasionally blog about them.